How to setup 3D Studio lighting scene like a photographer 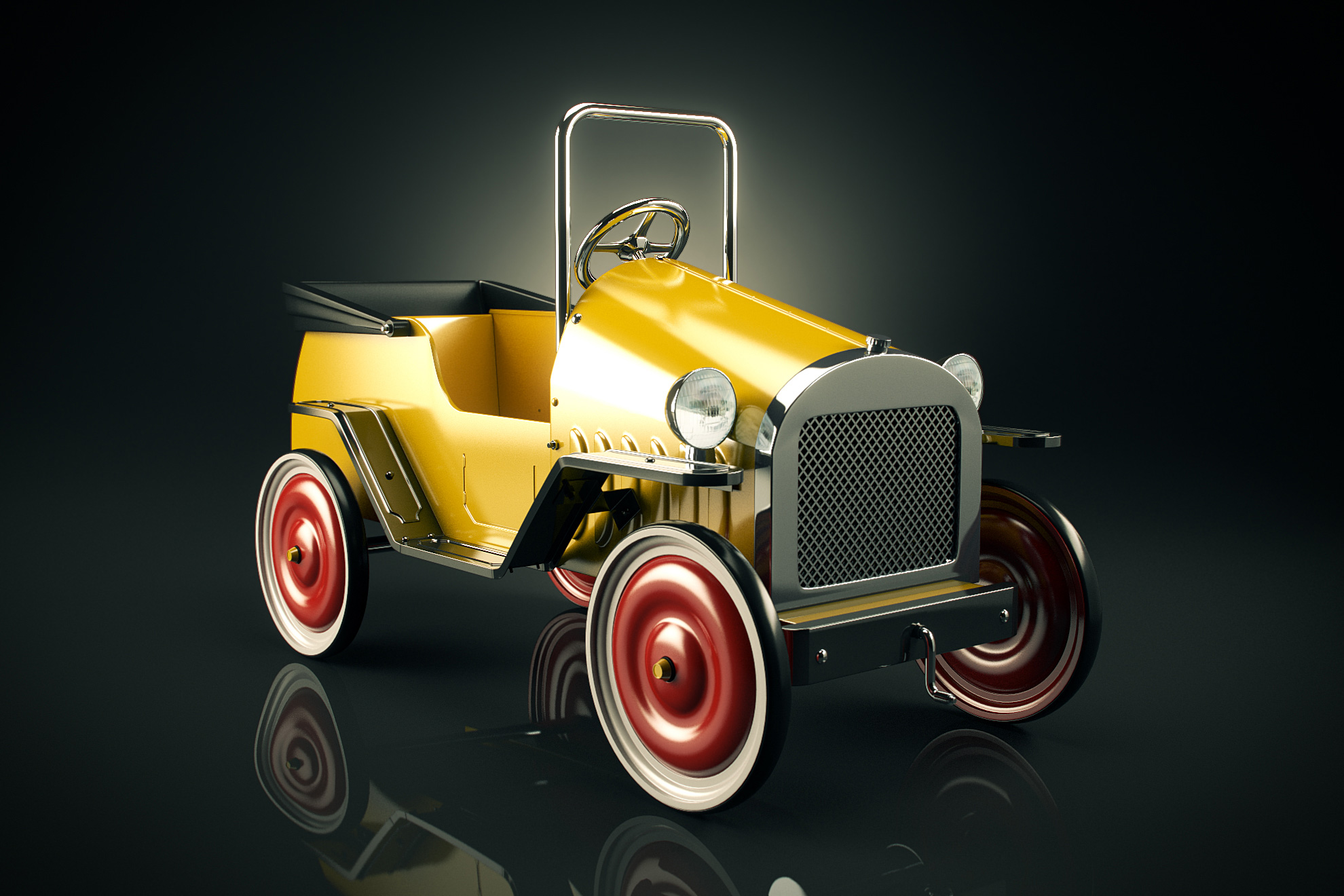 In this tutorial I’ll demonstrate how I go about creating a studio lighting setup, I’ll try to make it as simple as I can, but with a PRO look to the final render.

This setup is widely used by professional photographers for product and figure photo shoots, so it’s a good idea to understand how they do it in real life.

In general, all you need is a background surface, a couple of lights and you’re good to go.

Every object has its own unique figure and characteristics, that’s why my first move would be to examine the model and select the best way to portrait it to the viewer.

My subject is a fairly basic one – a toy car model by Evermotion. This is a nice example because it has a good amount of interesting details and shiny materials but still simple enough to handle for a beginner.

I’ll start by positioning the car in relation to the camera, a classic 45 degree angle works well here to show most of the car’s details. You can choose other view angles like top, front or side as long as it looks good in the end result.

For the background surface, you can use a simple plane, extend it beyond each side of the frame, convert it to editable poly and drag the back segment upwards while holding down “SHIFT” key to create the vertical surface of the background.

add “turbosmooth” modifier to smooth the corner of the surface. If the curve is too big, just add a segment to each of the polygons and move them closer to the corner.

I’ll set a black shiny material for the background to give a dramatic feel to the whole image.

TIP: to hide the subdivisions of the turbosmooth modifier, click on isoline display.

This is the important part, it’s all about placing lights in the right direction and with the right intensity. There isn’t one method of doing this, in some cases you’ll need no more than one main light and in other cases you’ll use up to 6 lights or even more.

For me, the best way to decide how many lights I need is by dividing the model into several surfaces and points of interest.

Looking through the Vray camera, I can see three main surfaces: the main one is the left side of the car, with the most amount of detail and the largest area.

The second one is the right side which mainly consist of the car’s front grill and the third surface is the top part of the hood, which has the least amount of details.

I’ll start by placing my main left light. I’m using Vray RT (real time) so I could see the effect on the model as I move the light around and play with its intensity.

I want this side to be well lit with nice highlights, but I need to be careful not to get it too bright or details may be burned out.

Photographers use special tools to make their lights look soft and defused when it comes to studio photo shoot.

Some of these tools are called “softboxs” which diffuses the light and “reflectors” which are simple planes that bounce the light around. We can mimic these tools by using Vray softbox texture in each light and a basic box as reflector.

Vray softbox – I’m not going to get into too much detail since this texture has a lot of features to it. The basic goal here is to make the hard edges of the Vray light softer.

In the light parameters click on the texture slot and add vray softbox, drag it into the material editor as an instance. Set the base color to dark brown-yellow.

Enable the hot spot and play with the outer and inner radius until you’ll get a nice vignette at the corners, as shown in the image below. This will create nice soft edges for all of our lights.

The right side should have less intensity than the left side so I’ll place a simple box with white color to bounce the light back to the model.

To give the highlights on this side some more definition I’ll place another Vray light (with softbox texture) above my reflector, pointing 45 degrees downward.

Finally, I’ll add a third Vray light right above the car pointing down, to illuminate the hood and the passenger area a bit more. That’s it for the model lighting.

Just one more thing…the background seems a bit flat for me, so I’ve added another vray light at the back, to make a glow like effect behind the car.

Here is the final result after post production in after effects ( color correct, glow, contrast…)